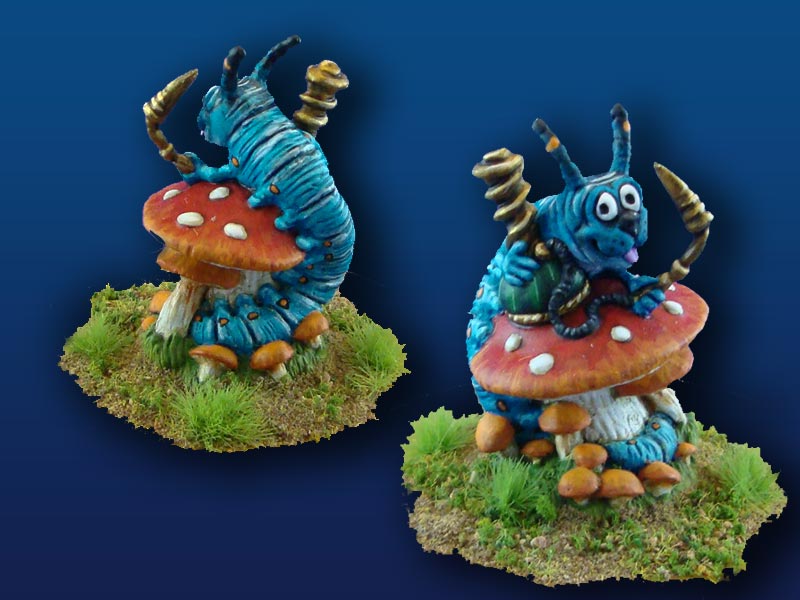 Katerpillar from RABBITHOLE
Back to: Science Fiction 28mm

"Who are you?” the Caterpillar asked again. It curled its head downward. Then it moved toward them, alarmingly faster than its size might suggest. They caught sight of its hands, for hands they were, running up and down in rows, lining the Caterpillar’s vast sides. They ended in simple claws, dark yet delicate as human fingers; the creature spoke again.

“What’s the matter – Cat got your tongue? It’s too soon in the story for that.”

A dreadful low, chuckling gurgle came from the Caterpillar’s proboscis, which extended out from its face a foot or more. Two long, black, serrated mandibles enclosed the proboscis. Soft, flexible feelers about its mouth quivered with humour, and the rigid mandibles, with their sharp red tips, made a clacking sound.

Its guests were not amused – they were immediately less so when a considerably smaller version of their inquisitor appeared at the rim of the toadstool. The diminutive larva crept along the lip of the cap, until it finally pulled itself atop the crown.

The Caterpillar saw it.

Its eyes grew even larger and now luminous.

In a flash, it lunged forward. Grasping its rival tightly with its clawed hands, the Caterpillar shook it savagely from side to side. Then, it sank its mandibles deep into the victim’s soft flesh. The prey cried out with a low, wailing sob. Dark fluid trickled from the captive, oozing thickly over the cap and for several unbearable moments, a soft, lapping came from the giant killer’s mouth.

It was all over in seconds."

“Why do you frown?” it asked. “It wasn’t a relative; at least – I don’t think so. You should try one yourself – you might like it.”