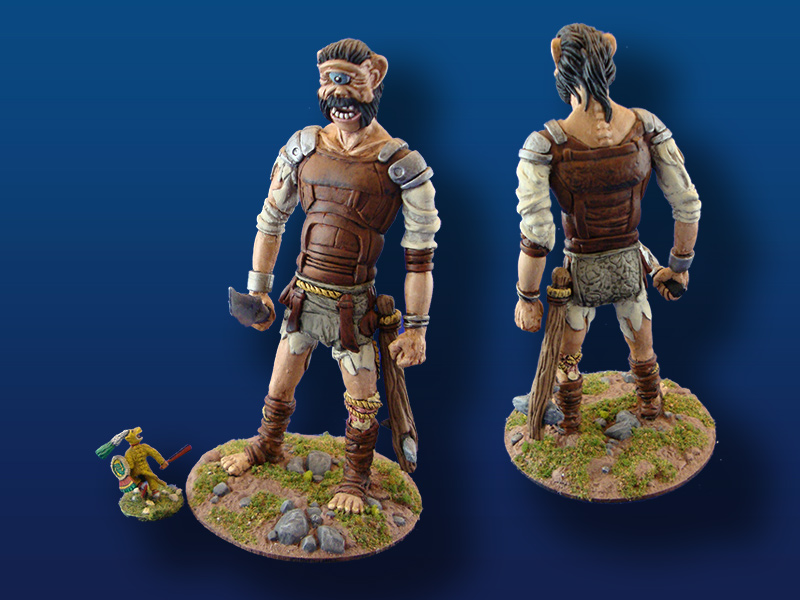 Tyrannus the Giant Cyclops
Back to: Kaiju Kaos

A cyclops, in Greek mythology and later Roman mythology, was a member of a primordial race of giants, each with a single eye in the middle of his forehead. The name literally means “round-eyed” or “circle-eyed”. Cyclopes can be used as opponents or objectives in nearly any fantasy setting. In Kaiju Kaos – The Miniatures Game, this particular cyclops is named Tyrannus and he is the leader of a small tribe of cyclopes that were awakened by the Rift.

Born a shepherd near the end of the Dark Ages, Tyrannus lived in peace for years until the Industrial Revolution swept through Europe and human expansion threatened his way of living. Seeking isolation, Tyrannus retreated further into the Caucasus Mountains where he eventually faded into obscurity. Tyrannus reemerged in the modern world when he and a few others were awakened by the Rift. While still seeking isolation from humanity, Tyrannus has been sighted battling dragons and clashing with Gourdzilla.

Tyrannus the Giant Cyclops comes in 4 highly-detailed urethane plastic components including a 4-inch diameter integral base and weapons.