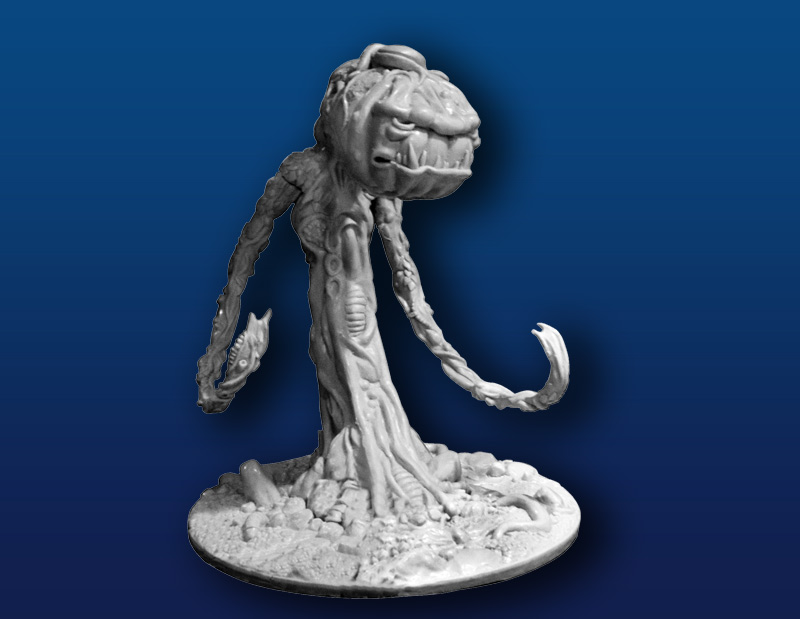 Description: Approximately 11 inches tall and comes with an integral 8 inch diameter base, Gourdzilla is a colossal-sized kaiju designed for use in Kaiju Kaos - The Miniatures Game.

The modern world as we know it ceased to exist in 2003 when the Rift, a mysterious tear in the space-time continuum, opened up and Hell itself spewed forth onto planet Earth. Long-dormant arcane powers and abilities once believed to be myth suddenly manifested in unsuspecting hosts, while those apparent charlatans who truly had a finger on the pulse of the supernatural unknown found their powers doubled or tripled in strength. Creatures that go bump in the night and ancient deities reappeared around the globe to spread terror and destruction. Terrible, enormous, 50-foot-tall monsters with feet the size of automobiles emerged from the oceans, crawled out from crevices, or arrived from outer space for reasons unknown. The United Nations formed an elite unit of the best and brightest soldiers and Specialists from around the world to answer this new Kaiju threat.

Meanwhile, greed, corruption, and curiosity drove others to arms in an effort to harness the powers awakened by the Rift and cause further chaos while positioning themselves in places of power. Still others suffered such personal loss that vengeance became their only motivator in entering the fight. And others were driven by belief and conviction, the elements of their faith rejuvenated by the powers unleashed by the Rift. Now, we stand poised on the edge of extinction. A new status quo must emerge, for the very survival of the human race hangs in the balance.

Also, Gourdzilla and Son of Gourdzilla can be purchased together for $100.00.